MARAC Spring 2011: Archival Ethics and the Call of Justice
I missed out on Rand Jimerson’s plenary speech, so I was happy to find this summary from L’Archivista.

2011 ALA Conference
The scheduler is up!  I still have no idea what sessions I plan on attending…

Homer Scissorhands
Several of the Smithsonian museums make a cameo in this Simpsons intro.

Last Friday, I attended the Mid-Atlantic Regional Archives Conference (MARAC) Spring 2011 Conference in Alexandria, VA.  I did a terrible job at taking notes that day, but below are some of my takeaways.  Rand Jimerson, who I mentioned in this post, spoke at the plenary session on “Archival Ethics and the Call of Justice” — but sadly I missed out on most of his speech since I was setting up my student poster (which you can check out here).

resources for creating a conference poster 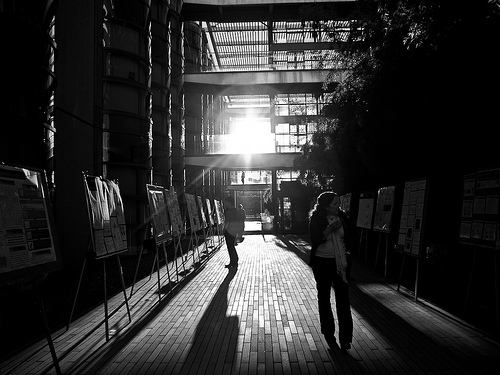 On May 6, I’ll be presenting a graduate poster at the Mid-Atlantic Regional Archives Conference (MARAC) Spring 2011 Conference in Alexandria, VA. It will be my first poster presentation (!), and I wanted to share some links that have helped me through the design process. Please feel free to comment with any suggestions! After the conference, I’ll be sure to share my final poster design as well as any lessons learned.

In two weeks, I’ll be attending Computers in Libraries here in Washington, DC.  It will be the beginning of my “conference season” this year.  The last (and very first!) conference I attended was the Society of American Archivists (SAA) Annual Meeting back in August, which was conveniently located in DC as well.  It was before I started library school, so I felt like an outsider who didn’t know anything — which made me pretty shy and uneasy about reaching out to others.  Hopefully this year will be different, as I feel slightly more knowledgeable than before (though still only in my second semester) and have made connections to other LIS folks through blogging and Twitter.  At the very least, I feel as if I belong to the LIS community now.

Below are the conferences I will be going to this year, along with the dates I’ll be attending.  Please let me know if you will be there too!  And of course, I will write about my experiences after (and possibly during) the conferences.

I will be presenting a graduate poster at SAA (and hopefully MARAC) — so if you have any tips, please share!